This section of the website documents our progress as we work through the phases of the project.  We will endeavour to document the project with both text and photographs.  Note: Latest news first

The new floorboards have arrived and are being installed.  The church now looks completely different and we can see real progress. 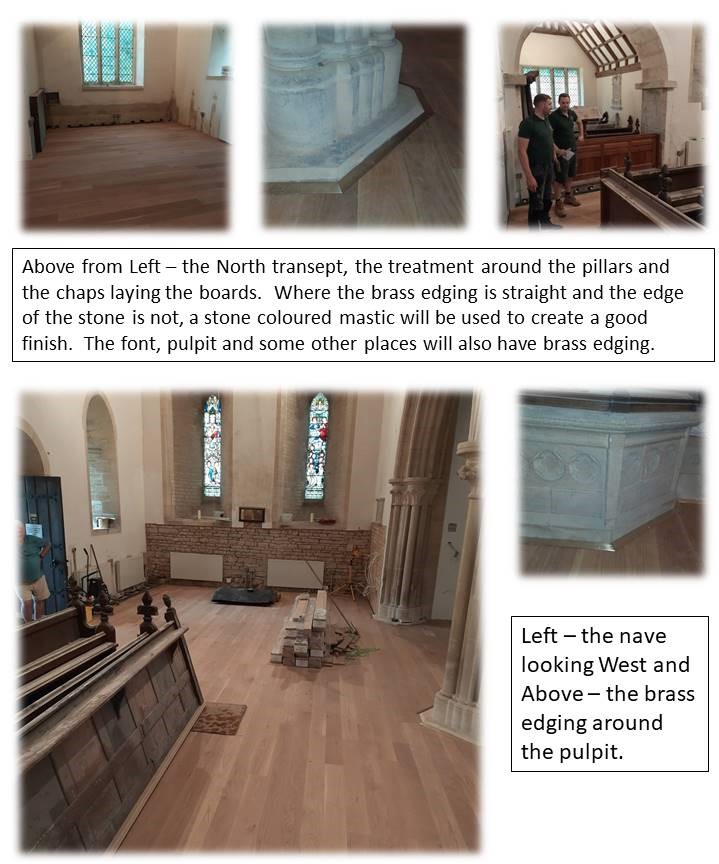 Since the last update it has been agreed to take a slightly different order for the floorboards (due to the company from which they have been ordered being unable to deliver until an unknown date).  Hopefully, this will mean that the flooring can be laid and delays can be minimalised.

Since the update a lot of work has taken place, however, due to a delay in supply of the floorboards (blamed both on Covid and Brexit!) the church interior does not look very much different.  In order to keep the project moving and to try to reduce any delays as much as possible, the work has been re-organised so that several phases are now running in parallel as follows:-

Phase 3 – installation of the much needed loo – see pictures below

Additionally, work is ongoing to lower the floor level in the porch to enable access to the church for whelchairs, and , the door on the North wall is being opened up as an emergency exit. 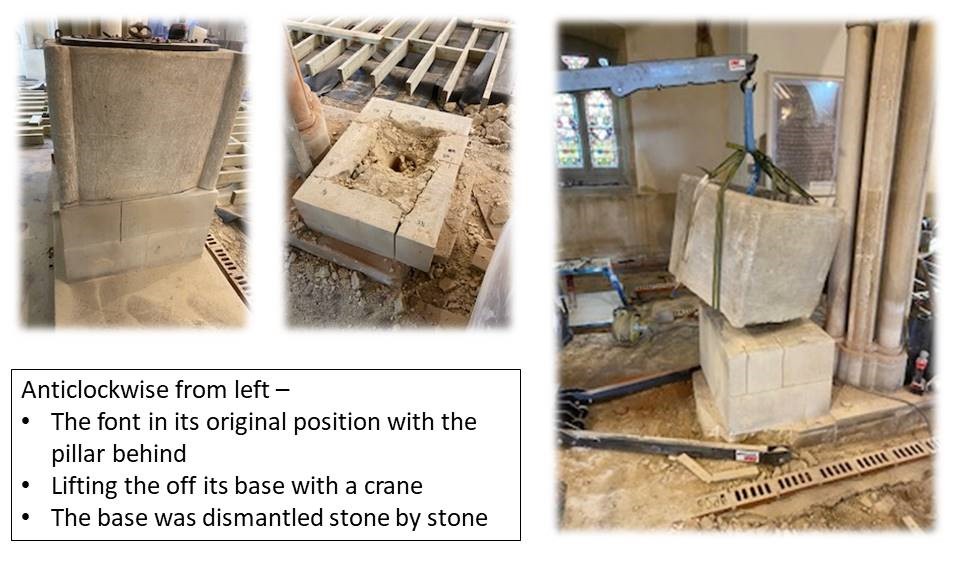 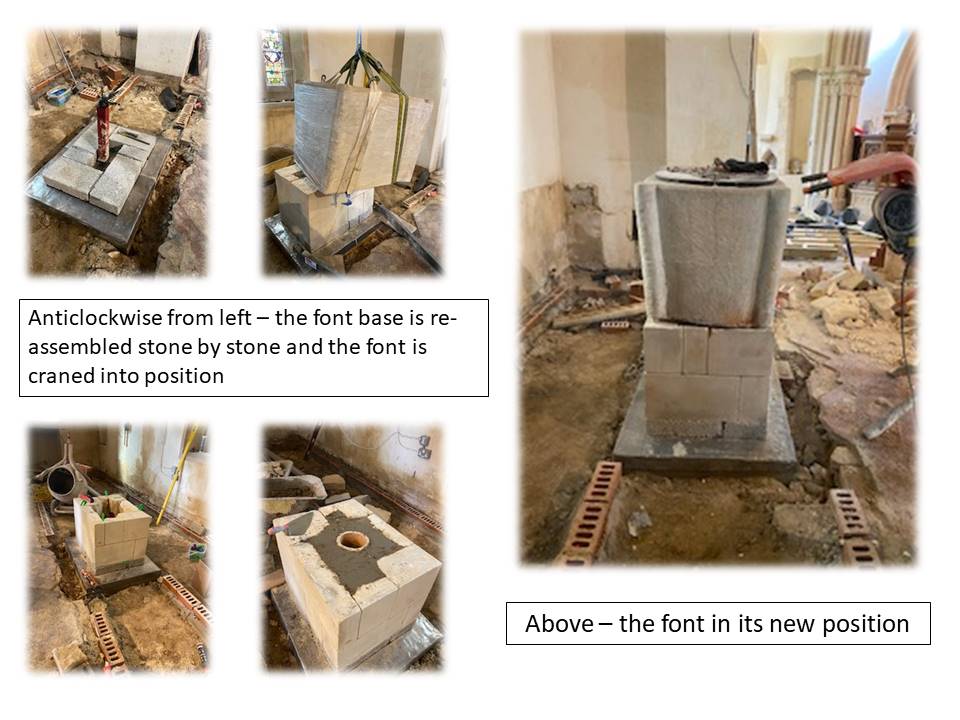 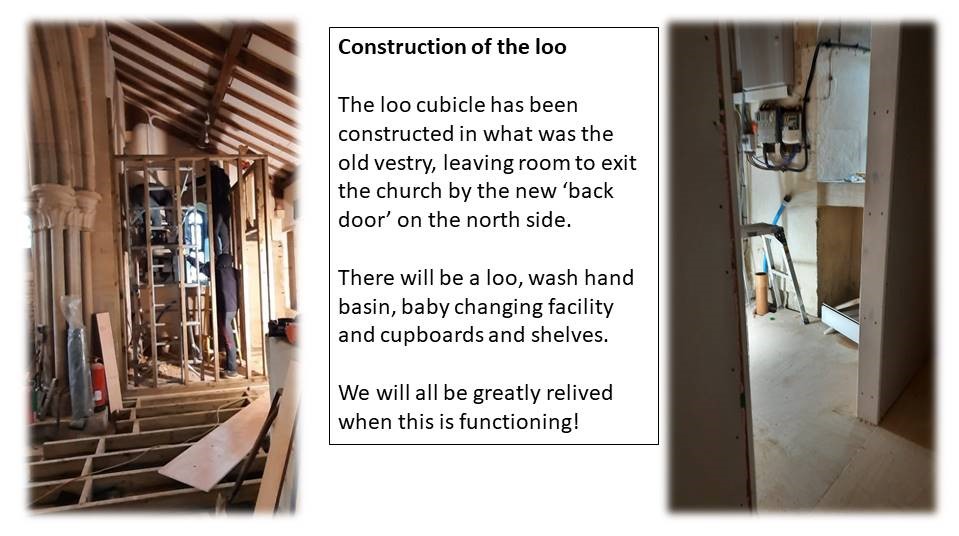 Digging the Sewage Trench in March 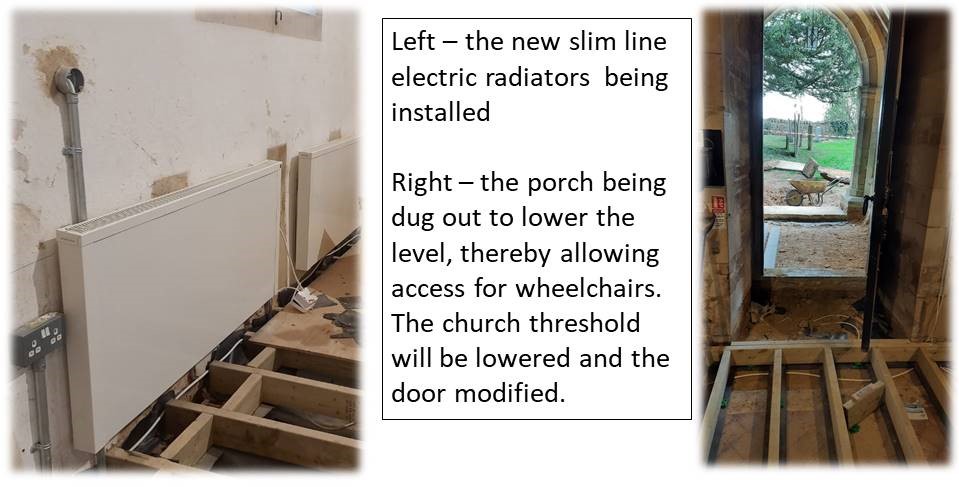 The roof is almost complete, just a few finishing touches to do and then the scaffolding will come down.

The joists are being laid for the new floor – see below – and final decisions are being made about the heating and servery. 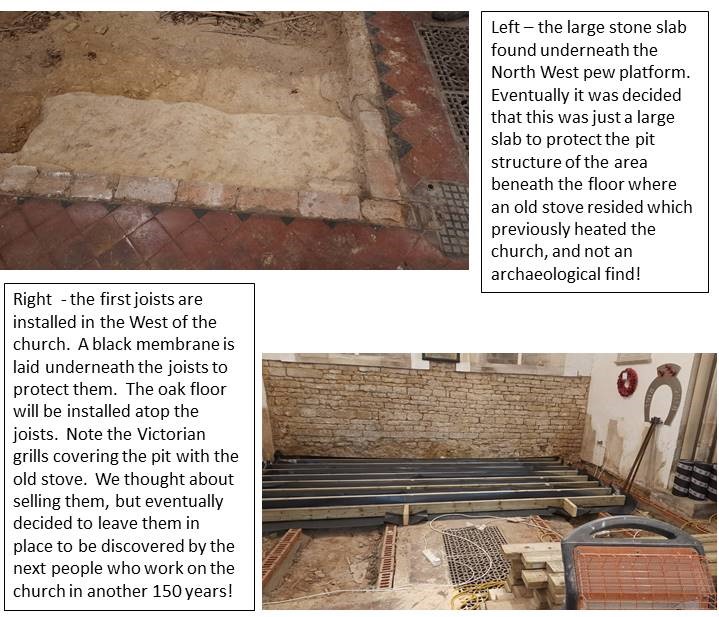 Great Excitement – work has now begun on the inside of the church!

All the pews have been sold, apart from the 2 at the very back of the church where years of water coming down the holes for the bell ropes had damaged them beyond hope.  All the pews have gone to locals which is great news, and the moneies raised (approx £2,000) will go towards new chairs.  We have already procured 43 chairs which come from a cathedral, so have suitable provenance!  Concidering the pews have been in place since 1881, they were in amazingly good order, although some, where the ends were against the wall had suffered some damp damage.  All have a few worm holes, but that just adds character!  All purchasers have been advised to give them a double worming treatment before letting them anywhere near their antique wooden furniture!!

The church now looks completely different without the pews – much larger – and it is good to think what we will be able to do with that space.

The pew platforms have also been removed, we were all intrigued to know what was underneath!  Well – there is a lot of rubble, some rather rotten joists on which the pew platform flooring was sitting and a lot of woodworm!  We have also found some large stones, which the archiologist is taking a look at and we found an old wood burning stove down some steep steps under the grids as you enter the church.

Next step – the new floor. 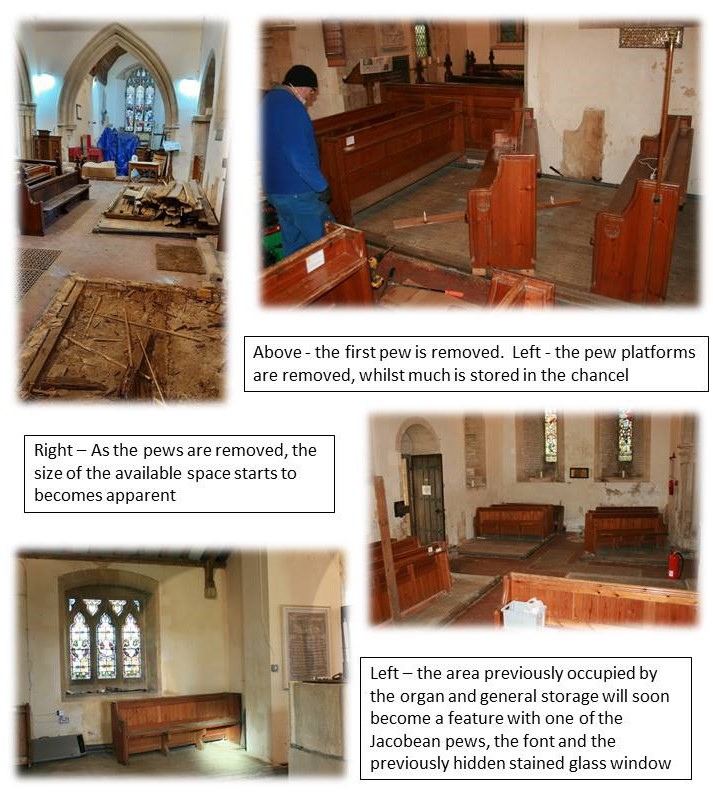 Bad weather, Christmas, and more bad weather has meant that there were some delays on the roof.  However, when weather allowed, Darren and Adrian, our roofers, came and worked.  The West side of the South Trancept and the East side of the porch were both stripped right back.  Darren then dressed all the Collyweston stone slates, put up new wooden battens and rehung the slates.  This is a long painstaking manual task, but the results are superb.  Work has now started on the South Chancel roof. 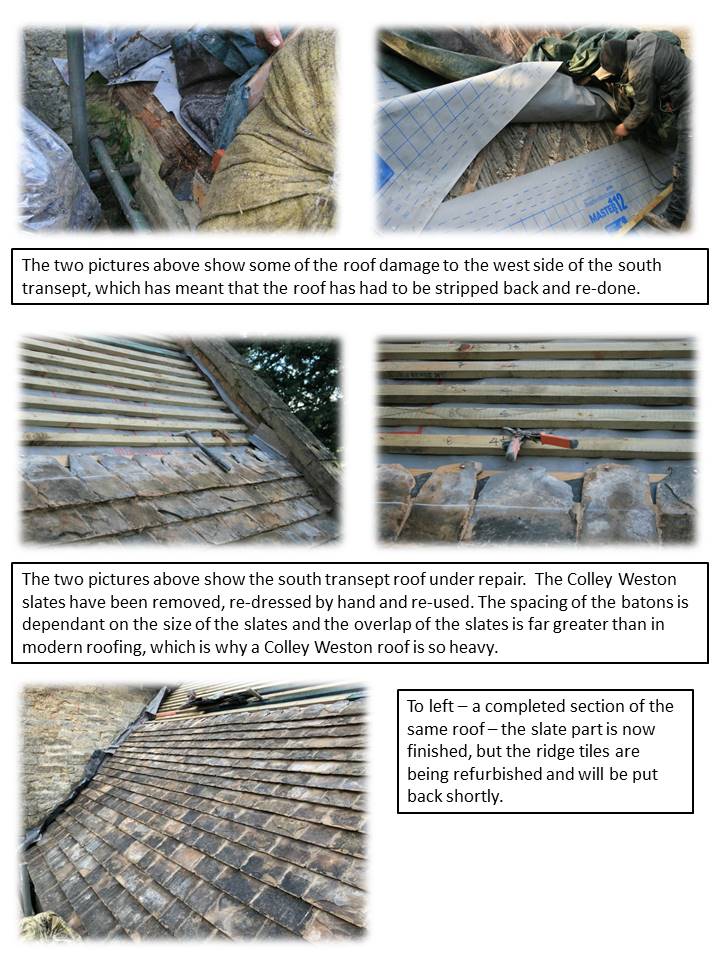 The North facing roofs have now all been repaired and the scaffolding removed.  The scaffolding has now been erected along the South side of the building and roof work ois starting that side – probably a bigger job than the North side.  A trench has been dug across the graveyard and a soakaway constructed in the North West corner.  This will eventually be conected to a drain across the ebtrance to the church. 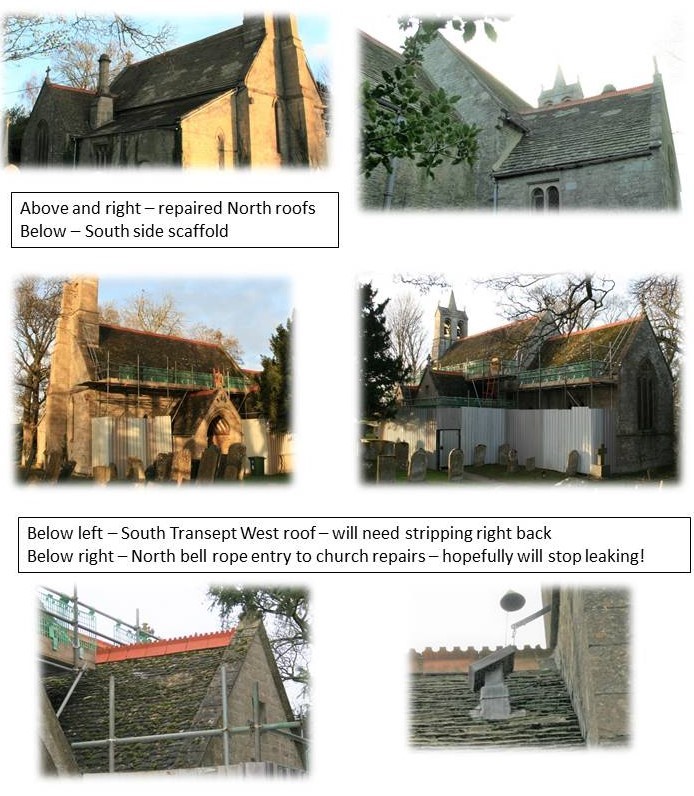 Progress meeting on the roof (North side).  Weather has not been good, so there have been times when ‘roofing’ was not possible, but the work done is looking good and no major problems have been uncovered.

Some pictures below from the meeting. 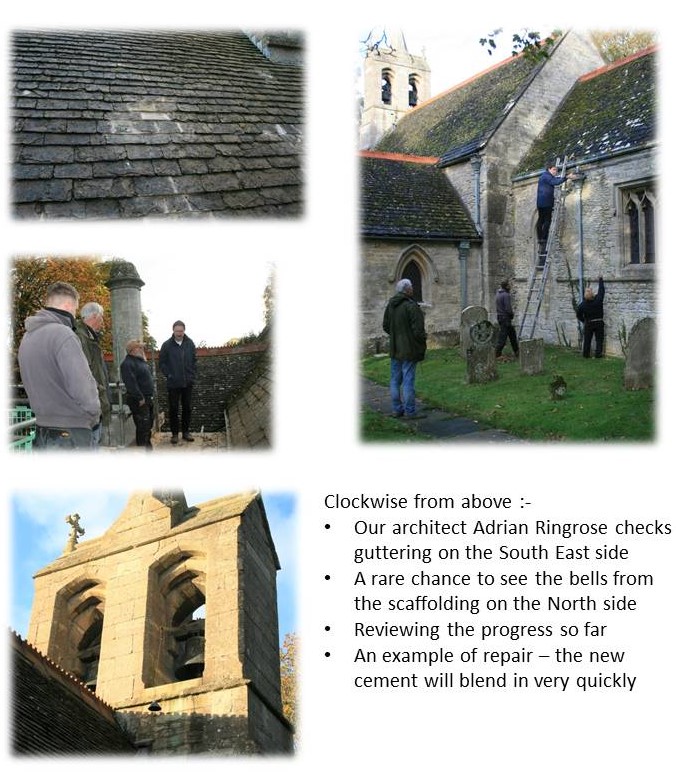 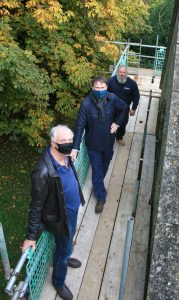 Once the scaffolding was up, the roofers came and started to carefully remove the moss.  This enabled them to see the full extent of the work required.

On Monday 19th October a meeting was held between the roofers, Messengers – click for details, the project chairman, Greg Harker, the project accountant, John Leefe, and the architect, Adrian Ringrose.  The meeting was masked and safely distanced. (Penny went along too to get some pictures!)  The roofers reported that repairs could be done to all elevations on the North side of the church without the need to strip right back.

This is excellent news.

Once the North side has been repaired, the scaffolding will be taken down and erected on the South side and an evaluation made of what needs to be done.

See below some typical examples of areas which need work done. 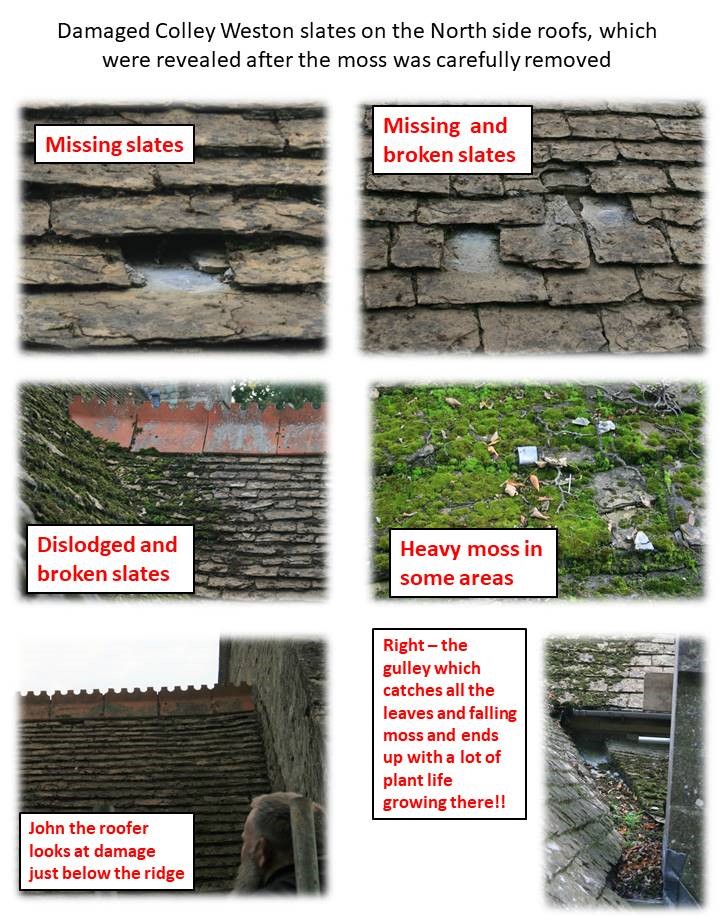 Great excitement – the scaffolders arrived this morning to put up scaffolding along the North side of the roof, ready for the work to begin!

By 2pm good progress had been made.

Following the recent award  of a £100,000 grand from FCC Community Action fund, we are now in a position to start the project.

Phase 1 is repairs to the roof, and scaffolding is due to be erected on 12th October.

However, we have already removed the organ which has gone away to be stored.  (We are still looking for funds to refurbish the organ)  This has meant removing the screen from that area.  The screen was erected in 1881, but was partially made with panels from an earlier pulpit so is being stored in the church and will be reused in the church refurbishment. 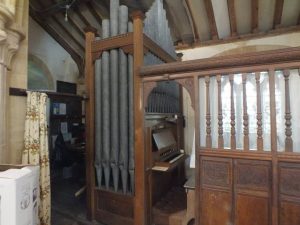 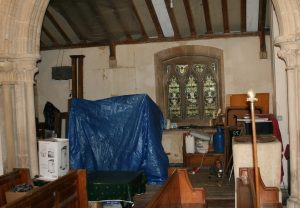 The frame of the organ under the blue sheet.  But note that along with all the junk the screen concealed there is a very lovely stained glass window, which will be visible to all after the refurbishment.